I must say how remarkable I find it that on the night that we adopt our annual budget, something that affects each and every citizen and business in the community, the turnout at this public meeting is absolutely dismal. Such was the case December 16. Besides the mayor, eight city councillors and city manager on podium, the audience consisted of nine people: two citizens, two citizens who also work for the city, three other employees and two Volunteer Citizens on Patrol (VCops) who were handling security detail.

As Mayor Anthony Housefathet stated: "The council is sensitive to the pressure many families feel as a result of the economic recession and fears about finances and savings. We again reviewed all our programs and services and added programs and services where required and balanced those additions with cuts across all departments to ensure we can continue to deliver the highest quality of service at a reasonable cost. This year was exceptionally challenging due to the large increases in the costs of some contracts such as snow clearing and asphalt so council and staff spent a very long time reviewing expenditures to ensure we could keep the average tax increase below two percent."

As a result of reforms to the island-wide Agglomeration council in 2008, the City of Montreal will no longer send a tax bill to Côte Saint-Luc residents. Instead, the City of Côte Saint-Luc now sets the property tax rates, collects the taxes and sends money to the Agglomeration of Montreal based on a fair mathematical formula approved by the Quebec government. Residents will receive this one bill from Côte Saint-Luc in late January 2009. The property tax bill is due in two installments: February 26 and May 28, 2009.

In 2009, owners of single-family homes and duplexes will be charged a one-time fee of $50 for the purchase of a covered new blue recycling bin. Residents will be permitted to choose the size of their new bin. Also, the City of Côte Saint-Luc will continue to charge a water tax and apply the revenues from this tax to its special financial reserve for water. The taxes raised will be used to pay engineering consulting firm Dessau Inc. for the maintenance and improvement of the Côte Saint-Luc water infrastructure, to buy water from the City of Montreal and to pay down the debt owed to the City of Montreal for the purchase the water distribution network in the territory of Côte Saint-Luc. Similar to municipal taxes, the water tax is also based on the taxable valuation of residential and non-residential properties.

Operating budget
Again this year, the city council and management team used a strict budget process used in the private sector. Instead of using historical budgets as a base and adding to it, a form of zero-based budgeting was used where every department function was reviewed comprehensively and all expenditures had to be justified. This budgeting process allows city council and the management team to allocate resources more efficiently as it is based on real needs and priorities, allows for better understanding of overall budgets, encourages managers to find cost effective ways to improve operations, and complements the city’s objectives of financial accountability.

Capital expenditures budget
Just as the operating budget allows short-term planning and control of current operating needs, the capital expenditures budget is a tool to aid long-term planning and control of long-range and capital needs, such as road and sidewalk replacement, sewer replacement and repairs, repairs to municipal buildings, upgrades and improvements to parks, pools and equipment, replacement and upgrade of municipal vehicles.

The three-year capital expenditures budget is $20.4 million in 2009, $5.8 million in 2010 and $5.4 million in 2011. The City of Côte Saint-Luc will continue to maximize the use of grants that are available for capital expenditures such as the Gas Tax Fund, F.I.M.R. and sports/recreation grants from the Ministry of Education, Leisure and Sports (MELS). The Intergenerational/Aquatic Centre has been identified as a possible project for 2009 costing approximately $15 million. The City of Côte Saint-Luc has submitted an application for funding of $7.5 million to MELS to cover half the cost of the project. The municipality is waiting for a positive reply from MELS before making a decision to proceed.

Go to www.cotesaintluc.org where you can see the detailed power point presentation that was prepared by Councillor Dida Berku, who is responsible for finance. 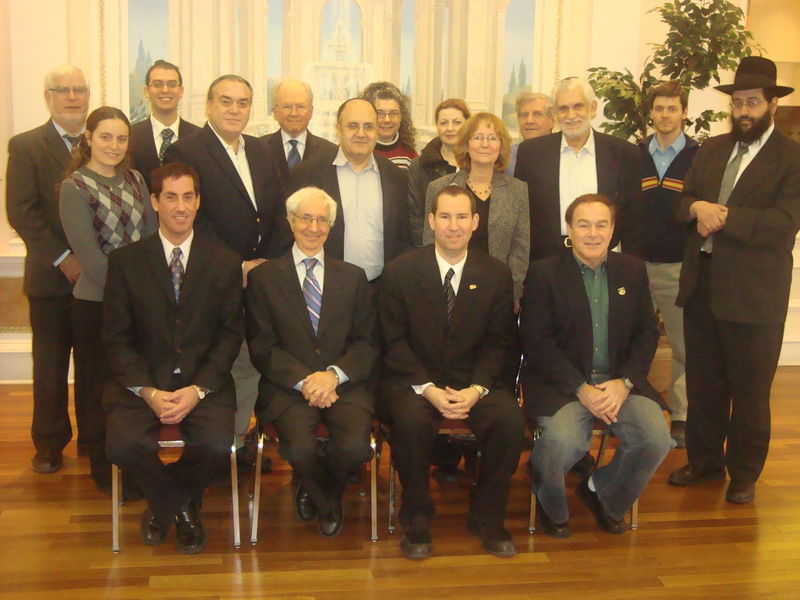 Councillor Cohen welcomed all to the meeting and thanked Rabbi Ohana and the administration of Or Hahayim for hosting this meeting. He noted that this committee meets twice a year, bringing together representatives from community organizations and institutions operating within the city. Past meetings have been hosted by the Maimonides Geriatric Centre,  Beth Zion Congregation and CSSS Cavendish. This body represents an excellent opportunity to gain new contacts, learn more about initiatives being taken by the city and share information. Councillor Brownstein  represents District 7, where Or Hahayim is situated. He credited Rabbi Ohana for inspiring the creation of this committee, noting that the rabbi had suggested meetings with  councillors and community leaders would be a plus. Councillor Cohen took this idea and ran with it upon his election three years ago.  Councillor Brownstein said that he has had an excellent and longstanding relationship with Or Hahayim since he was first elected in 1990.
Everyone around the table was given an opportunity to introduce themselves.


2. Words of Welcome from Rabbi Ohana

Rabbi Ohana gave everyone on hand a copy of a beautiful agenda book prepared by his synagogue and Nahar Shalom Congregation in Hampstead.  He expressed his appreciation for the work being done by the mayor and city council and for the cooperation always shown with his synagogue.  The quality of Jewish life in Côte Saint-Luc, he said, is wonderful.  Rabbi Ohana explained that he was born in Morocco and came to Montreal via City University of New York to become principal of École Maimonide in Côte Saint-Luc. He eventually assumed the pulpit at an expanding Or Hahayim, which is now 30 years old and has a  membership of about 400 families – mainly Sephardic and French speaking.

Councillor Levine provided a brief update on the Cavendish Mall dossier  and previewed the February winter carnival while Councillor Brownstein spoke about the new double left turn on Cavendish and Fleet, the new collective agreement the city will sign with its workers and  positive developments that continue to occur three years post demerger from the city of Montreal. Darryl Levine spoke about the new street signs that will soon be up across the city.

Tye Hunt, Assistant Waste, Environment and Safety Technician for   Côte Saint-Luc, gave a  much appreciated overview of the city’s new brown bin project and volunteered to come speak to any organization.  There was some interest in the room for him, in fact, to come to do that. Tye’s presentation also solicited  a number of good questions.

Ruth Najman from Agence Ometz, which caters to many new Jewish immigrants residing in Côte Saint-Luc, spoke about a program called The Good Food Box  -   a food security program that has been serving the Notre-Dame-de-Grace community since September 2003 and   became a regional program in 2007. The idea arose from a conference held in March 2002 where a number of community groups from the area agreed that a collective food-buying program would be the next logical step to address food security and make healthy food more accessible in the area.  Moisson Montreal coordinates the regional Good Food Box program in collaboration with an advisory committee made up of Aliment’Action & CLSC – St-Michel, the NDG Food Depot & TCSA, Federation CJA, TCSA – Côte-des-Neiges, La Table CIGAL & Rencontre cuisine 25– Centre-Sud, Table de quartier du Nord-Ouest de Montréal – Pierrefonds, La Corbeille – Bordeaux-Cartieville, SESAME – Mercier-Est. Ruth now overseas the Federation CJA part of the operation. She explained how environmentally friendly this program is. For example, damage to the environment from transporting food over long distances is greatly diminished by buying locally. According to one study conducted in Arizona, if only one tenth of their food was produced locally, hundreds of thousands of gallons of fossil fuel would be saved and carbon dioxide emissions would be reduced by millions of pounds. She put out a call for someone from Côte Saint-Luc to be willing to help out and serve as a depot for the program. She  was connected with Tye Hunt who will invite her to a meeting of the Eco Action Committee. Tye believes there would be support on that committee for the initiative.

6. Update from organizations on activities of interest

Sheldon Weinstein recently assumed his post at Beth Zion, after retiring as principal of Herzliah St. Laurent. He noted that Beth Zion has a large scale renovation underway at its banquet hall and roof. Rabbi Ira  Ebbin, who hosted a meeting with this group last year, will be formally installed at a ceremony May 3.

Arnold Rosner of Magen David Adom for Israel expressed interest in working with the city in its May blood donor clinic.  In Israel, this is part of its mandate.

Rabbi Benoliel spoke about his congregation on Parkhaven, noting it attracts a lot of youth. He asked that the city consider organizing more programs for religious Jews, such as  possible special swim times at the pool. Armand Moyal said that his small congregation on Baily Road has 30 families.

David Smajovits said that the Bialik facility on Kildare continues to expand. Phase 1 of the expansion added a fourth floor, which will soon house the JPPS-Bialik head office, currently located at Decarie Square. Phase 2 will involve an athletics and performing arts facility.

Sharon Bitensky noted that B’nai Brith recently relocated from Decarie Square to the Côte Saint-Luc Shopping Centre.  She asked for assistance from the French speaking educators in the room to help in Operation Thank You in which students write letters to Canadian soldiers overseas. She also spoke about a group she runs for 40 to 50 new families from Argentina and Latin America. These people reside in Côte Saint-Luc and once a month they convene for meetings. She is always seeking guest speakers and later spoke to Tye Hunt about doing so.

7. Tour of the facility

Once again Councillor Cohen thanked Rabbi Ohana for hosting this meeting. The  rabbi then took everyone for a tour of the beautiful facility.