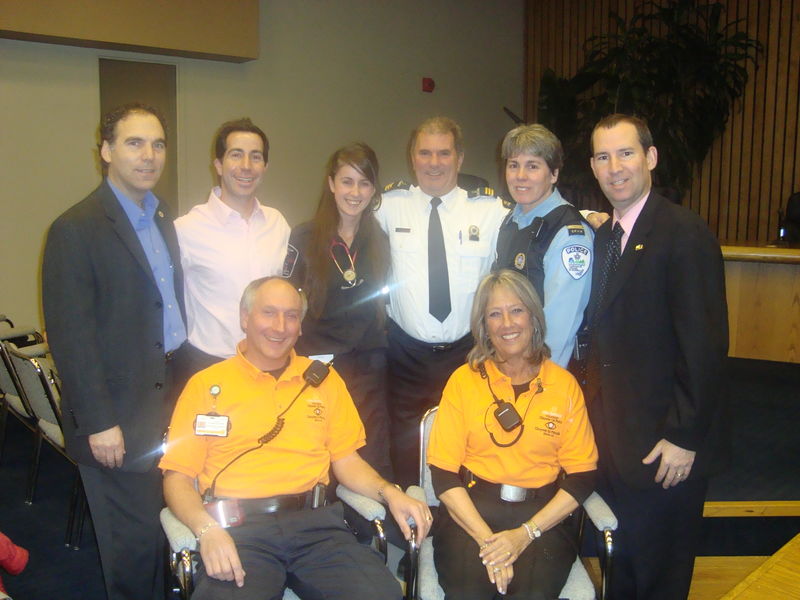 The following is a summary of my District Council meeting on Public Safety.

More than 50 people were in attendance from District 2 and other parts of the community. This meeting was co-chaired by District 2 Councillor Mike Cohen and District 6 Councillor Glenn J. Nashen. Councillor Cohen noted that he has been holding these type of meetings for his constituents on a twice a year basis since his election three years ago. In this case, since the theme was Public Safety, he asked Councillor Nashen to join him. Not only does Councillor Nashen oversee the Public Safety portfolio, he also has several decades of hands on experience with the Emergency Medical Services (EMS) and was the creator of the successful new Volunteer Citizens on Patrol (VCOP) program. Councillor Cohen thanked Montreal Police Station 9 Sergeant France Denault, Public Security Chief Michel Martel, Mayor Anthony Housefather, VCOP representatives Lewis Cohen and Susie Schwartz and Audrey Miette of EMS for agreeing to take part in this most comprehensive meeting.

Councillor Nashen introduced himself to the audience, noting that he first got involved with the city through EMS (then known as Emergency Medical Organization or EMO) 30 years ago when he was in high school. He was first elected to council in 1990. Over the years he has also worked as an emergency medical technician with the Quebec ambulance system. EMS has been his greatest passion. When he was elected he brought up the professionalism of the organization by insisting that a full-time staff director be hired. "Saving EMS," he said, "has been a crowning achievement for me just as being part of the committee to demerge Côte Saint-Luc from Montreal was.

Mayor Housefather expressed great pride in the excellent quality of emergency services we are able to deliver in Côte Saint-Luc. He noted that when he was elected mayor he decided to empower members of council with portfolios. In the case of Councillor Nashen, Public Safety was a natural. And he credited Councillor Nashen for investigating an existing VCOP program he saw in Florida and having it emulated here. The mayor stated that we are the only community on the island of Montreal with a VCOP force. He then moved on to Neighbourhood Police Station 9 and recalled how just a few years ago the central Police headquarters was looking at ways to save money. One of the proposals was to close Police Station 9, which serves Côte Saint-Luc, Hampstead and Montreal West. Through the hard work of the three councils and commentary from the Police themselves, we were able to save Police Station 9, which has given us the closest thing to our own police force since the days when municipalities actually did have their own. "Côte Saint-Luc residents have taken a real liking to Police Station 9 and we feel safe," stated the mayor. The mayor then went on to describe how lucky we were as well to save our EMS. When the forced mergers took place the city of Montreal signed a collective agreement with the Fire Department which would prevented EMS from responding to Priority One emergency calls. EMS has saved many lives because of its Priority One status. The passage of Bill 22 by the Quebec government allowed EMS to remain intact and for us to keep the service in perpetuity. Turning to Public Security, the mayor said our department is one of the nest on the island. He credited Chief Martel, a former Montreal police officer, for bringing order to the city and making sure bylaws are enforced.

The mayor took questions from the floor. One gentleman complained that Rosedale Avenue, near Merton, is being used as a speedway. Motorists, he said, are not paying attention to the stop sign. The gentleman wanted traffic enforced because this is a school zone. He was corrected that this is not a school zone. However, Sergeant Denault took note of the situation. The mayor added that the Quebec government will soon be lowering the maximum speed on streets like this from 50 to 40 km per hour. Councillor Nashen recommended to anyone who sees a speeding vehicle to mark down their license number. "Often," he said, "you will find out these are people who live on your own street." There was also a question as to whether the city would consider buying defibrillators for condo apartment buildings. Councillor Nashen began by saying the city already owns four very sophisticated defibrillators and a number of other smaller/simple models. These are not particularly expensive, he said, and condo apartments should purchase them on their own. There was also a question about whether it should be mandatory for pools in private buildings to have lifeguards. Councillor Nashen said that would be difficult to insist upon. But he did say that each pool is inspected once a year by the city and that there must be a key behind a glass pane in case someone needs to get through the secure door to help someone. Security in the building usually has cameras to watch the pool. And there is also a dedicated phone required on the premises. A resident of Rembrandt Avenue asked for the city to place lights leading to a passageway that leads to the Cavendish circle. The resident was explained that this is private property that does not belong to the city, but rather the Villas de Merrrimac town house complex. Therefore we cannot do as he wishes. We will, however, bring this subject up again with the condo administration.

Chief Martel began his presentation by going over some frequently asked questions. Do not put your garbage out the night before pickup, he said. It attracts wild animals, especially skunks and raccoons – even foxes. He also urged residents not to feed these animals. Regarding parking violations he reminded everyone about bylaw 66, which says not to park in a fire lane. This is for emergency vehicles only. "When we see a car parked in a fire lane we wait three minutes for the person to come back or else we enforce the bylaw," he said. Turning to school zones and pedestrian crosswalks, he said his department enforces this bylaw very strictly. Drop off zones, he said, should be exactly that. At schools let your children off and then move on. On the subject of requesting permission to park your car on the street overnight, these requests should go directly to his department. If there is a shiva at someone’s residence or apartment, concessions can be made. Short-term overnight parking requests of three days or less can be made directly with the Public Security dispatcher. For more days than that, you need to call Chief Martel’s office directly. "My goal," he said, "is to work hand in hand with the police, EMS and the VCOPs. With the police I have an especially good relationship with Commander Sylvain Bissonnette, Sergeant Denault and Officer Alain St. Marseille of the Traffic Division.

Sergeant Denault said she has been working at the Côte Saint-Luc based Station 9 for three years now. She expressed her delight in working with our Public Security and VCOPs. "In Côte Saint-Luc you are lucky because you have more eyes," she remarked.

Lately there have been a lot of breaking and entering incidents in the area, especially in Hampstead. "If this increases a lot it could impact upon Côte Saint-Luc," she said. "We are doing a lot of patrols and have plain clothed police officers involved."

Sergeant Denault said that one should always take note if they see something suspicious going on at a neighbour’s house. Call the police if you have any concerns. Perpetrators usually try to get in through a back entrance. She also gave warnings to the elderly who frequent the Cavendish Mall where there have been incidents of purse snatching of late. Children as young as 13 are being identified as perpetrators. Most recently an 85 year old woman fell to the ground after being jumped by two 13 year olds. They stole her purse and the fall broke her hip. "Keep your purse close to you and do not carry too much cash," she recommended. Touching upon traffic, she recognized the congestion problems on Kildare coming from Bialik, Councillor Cohen acknowledged the problems, but stated that (A) the school has nearly 1,000 students (B) the situation has actually improved in recent years due to the cooperation he has received from the school administration and the establishment of student traffic safety committees.

Councillor Nashen proudly repeated that we are the only municipality in Quebec to have a VCOP program. He introduced Lewis Cohen, one of the VCOP volunteers, to say a few words. Mr. Cohen said that there are two VCOP vehicles which patrol the city looking for anything out of the ordinary. This could be a garage door mistakenly left open or a dog off a leash. VCOPs are not police nor public security officers. Therefore if they see something which requires one of those two departments to respond they are alerted. The VCOPs carry radios in each car, which are connected to the city dispatch centre. There are 75 volunteers and more are welcome to call and sign up for the training program. Many members are retirees. Two leasing companies –Toyota Montréal Nord and Claireview Leasing- have provided vehicles free of charge.

Councillor Nashen spoke about EMS as the only service of its kind in Quebec, with some 70 devoted volunteers. EMS is available 24/7, 365 days a year. He introduced Audrey Miette, a city employee in dispatch, but an EMS volunteer. She spoke glowingly about both the experience the training she went through. EMS responds to an incredible 3,300 calls a year.

The floor was opened to questions. One lady wanted to know if parking tickets can be handed out if a car parks illegally on private property, such as a condo driveway. Chief Martel responded in the affirmative. There were complaints about gridlock on Kildare Road due to the Bialik traffic. It was explained that this is a very difficult problem to resolve completely and that it is obviously most difficult at morning dropoff and afternoon pickup times. Councillor Cohen said he has obtained good cooperation from the police in undertaking occasional stakeouts to hand out tickets to Bialik parents who do not abide by traffic regulations. Are the painted white lines on Kildare Road, near the entrance to the police parking lot, indicators that no cars are to idle there waiting for the light to turn? We promised to look into this. There was also some concern expressed about homeless cats congregating near Mount Sinai Hospital and Maimonides Geriatric Centre. Shelley Schecter asked that Public Security and the VCOPs be on the lookout for stray cats which her group of volunteers works towards trapping, vaccinating, deworming and neutering as a way to control the cat population.